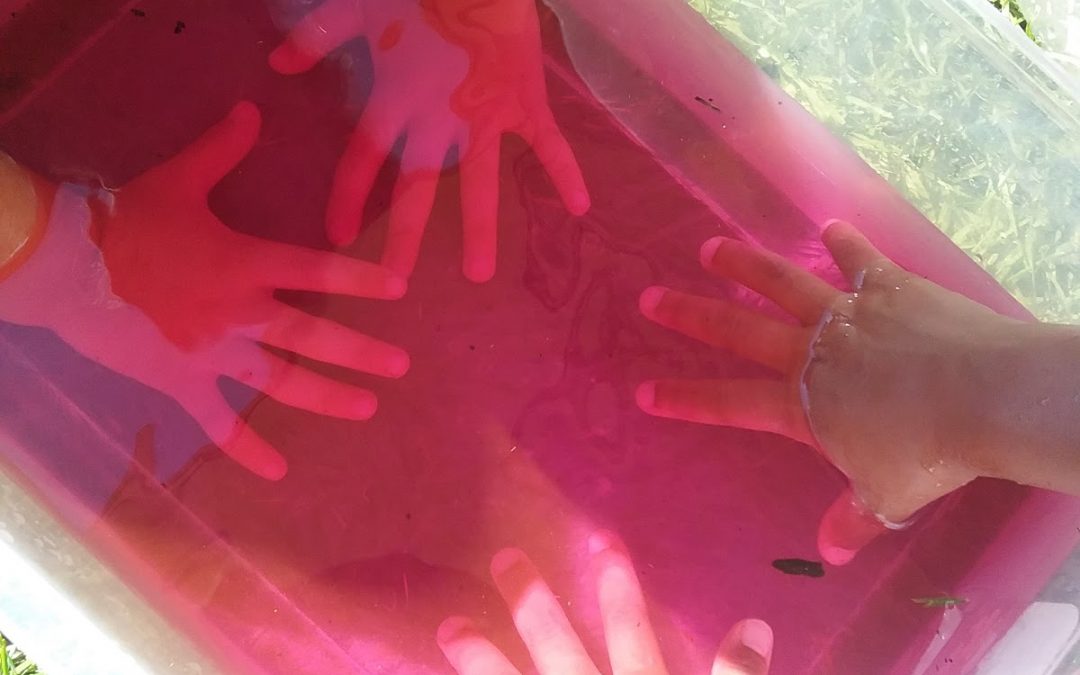 Throughout the summer, water play has a big role in the Outdoor Studio. One of the ways I’ve found to defeat the heat and help children stay happy while outdoors is to use water in many, many ways. Over the past several weeks, the children learned that water is a main source of life and were all thrilled to help nurture our beautiful garden. They filled watering cans, watered the plants daily, and made the connection that water is not just for the plants but also for their own health and well-being. They came to understand the value of preserving water but also had opportunities to use it as a play element. Water became an integral ingredient for mud pies and pinecone soups. It was essential for artistic works created with watercolors.  It became a sought after element for cooling down when it spurted from the hose and sprinkler.

I know that water play is captivating for young children and observing the learning in the play is fascinating to me. No matter the age, children love to fill and pour. Their reactions and expressions often reveal what they’re thinking. Knowing this I decided to set up a provocation.

My intent was to arrange some familiar things with some tools that were new. I gathered some clean bottles that the children are used to using. I wanted to introduce Kodo’s Funnel Stand and this was a good opportunity to observe how the children would use the new tool. I was also looking for a new way to present color mixing, so I arranged the stand with colored water, clear empty bottles, and a water dispenser.

This provocation immediately drew interest. The children ran straight to the table to explore it. They were drawn to the familiar; the water and were also intrigued by the new funnels and bottles filled with color.

The arrangement of the old and new materials coupled with the children’s recent experience and knowledge fueled conversations about color mixing, degrees of color, and the quantities required to mix them. Children were happy to create their own new colors, using bottles, cups, and funnels. One group’s favorite was named RED VELVET because it was “just like the cupcakes”. Their enthusiasm was contagious and the teachers happily joined the play.

After a few days of writing notes and listening to their words, I realized that the color mixing provocation was a catalyst for other equally meaningful learning. It was a platform for rich social-emotional development. All were engaged in play that supported negotiation and cooperation.  I often heard them say things such as, “ I need some help”, and “I need someone to hold it.” The children relied on each other while transferring water from one bottle to another. Many times they worked in pairs with one child pouring while the other stabilized the funnel or another bottle. They also used language and verbal cues to help complete their mission. “I will tell you when it’s full….a little bit more…STOP!”

So much learning happened in a few short days. One team challenged themselves to fill up the bottle without spilling any water. Their process is a story in itself, one of understanding the power of planning, persistence, and teamwork. Another day several children practiced many problem-solving strategies as they chose to work together as one big group, around a small table with a limited number of tools and shared resources. Each took on a role, contributed to the common goal, and communicated with the others during the investigation.  Individual opinions became shared ideas and the simple act of transferring water excitedly grew into the dangerous but all-important job of pouring lava!

Water is one of those elemental materials that all the children find engaging. Offering it as a material, and arranging it with compelling tools lead to many days of investigating color, flow, measurement, and more. It was exciting to observe how and why their skills and knowledge developed and changed over just a few days. As the Outdoor Studio Educator, it was especially satisfying that during those days I never heard the words, “I want to go inside”.


Elinor Rifkin has been teaching for 12 years. She enjoys exploring with children and is constantly in awe of their endless sense of wonder. Currently Elinor is working as an Outdoor Studio Coordinator at the Rabbi Foster ELC at Temple Emanuel in Denver, CO.