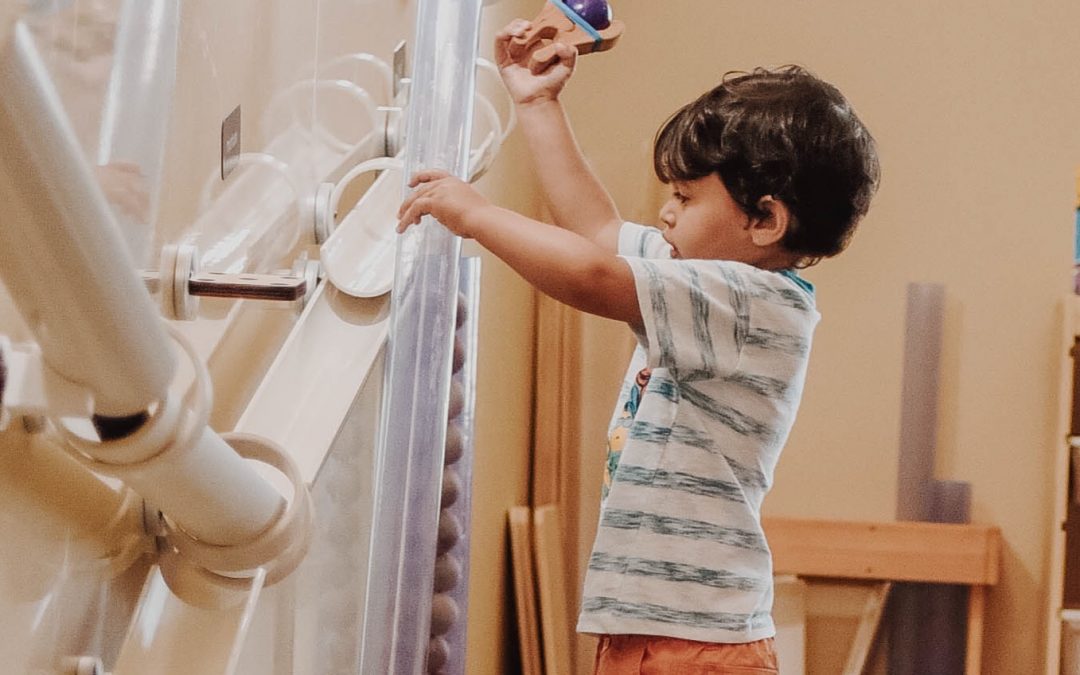 Colette, age 4+ yrs., has a vivid imagination and routinely creates complex block structures, intricate drawings, and has a knack for detailed storytelling. She’ll often use the contents of an entire shelf when constructing one of her ideas. When she was presented with a small bag of Building Sticks, it was natural that she raised her eyebrows, and frowned as she was facing the constraint of using only one type of item. She said, “There’s not enough for me to make stuff with.” I asked if she wouldn’t mind using just those for just a while and then after a bit it would be fine to add other things from the classroom. She agreed, mentioning that some pretty jewels might be nice, and set about examining and exploring the sticks. “Hmm,” she said turning one stick over in her hands. “They’re very smooth and strong, you know”, she said and began to identify other properties. “There’s different colors and they’re kind of flat, too.” She laid one down on the table and then stood one on end. “Cool”, she commented, “they stand up”. This discovery prompted her to stack several and she was surprised at the result. “I didn’t even know I could do this! Look what I did!” The success of her new found skill of vertical stacking gave Collette reason to continue her mini -investigation. She spent nearly thirty minutes exploring this newly added classroom material and through her process she discovered that stacking the sticks in various ways yielded much. She tinkered with making alphabet letters, noticed the hidden geometric shapes within her designs, and used the sticks to represent towers and bridges that included both horizontal and vertical components. It happened that Colette was sitting next to a window and she also “played” with the shadows created by her constructions, predicting how the positions of the sticks would affect them.

Colette never did get any other materials, including the sparkly jewels. Her discovery of just how much she could do with the building sticks alone was fun. While reluctantly cleaning up before lunch she said to me, “You know what? I didn’t even need anything else to go with those sticks! That’s pretty good of me, huh?” Deciding to raise the bar and support Colette’s process of systematically examining a material, I posed, “Hmm, Colette, I wonder what other things you could play with like you did with the sticks.” Her eyes darted around the classroom. “I could do that with everything! Well almost everything. But not today!”

In this case a little gentle coaxing to work with a constraint challenged and fueled Colette’s inquiry. The material’s simplicity appeared at first to pose a challenge. Colette’s willingness to work with less than the usual amount of “stuff” proved to be valuable. The constraints of having a limited quantity and only one type of building material gave her reason to become focused on identifying ways the pieces could be used. She drew on her knowledge of block building, but also embraced a scientific approach. She experimented with standing, stacking, laying, overlapping, and connecting the pieces, all the while testing whether or not the sticks behaved like unit blocks.

Structural and other engineers must work with constraints in order to design real world solutions solutions to the problems they seek to solve. They spend a great deal of time working with a material in order to fully understand its properties, affordances, and limitations. This kind of thorough examination was clear in Colette’s play. Identifying ways in which children are practicing engineering skills is often elusive in the early childhood classroom. Here the “E” in STEM came to light with a unique inquiry approach to teaching.

Would simplifying the number or type of materials prove to be beneficial in my classroom? What areas of the environment could use a little editing or decluttering? What areas could use something new or unique? How often do children use only type of material and have our observations of their play uncovered why? or brought new questions to light?

What other ways can you use that (those)? What happens when you use them on the floor or move them to the carpet? What’s different about them when you use them in different spaces? What ideas do have when you play with those? What did that material tell you about itself? If you could only pick one other thing in the room to use with these, what would it be? and why?