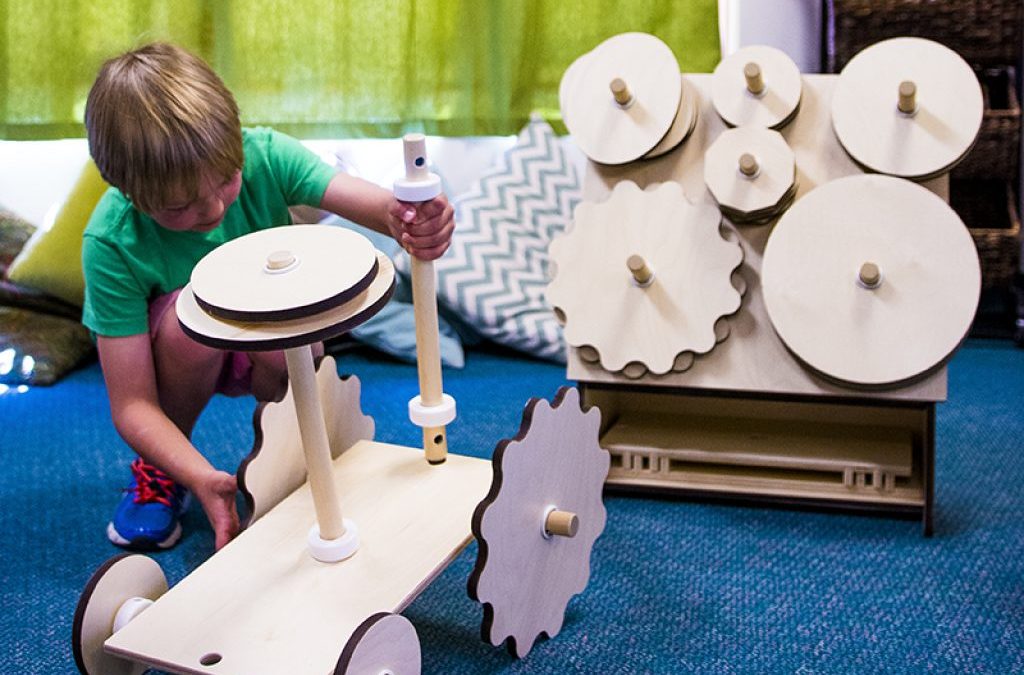 When we think of technology, tools, and machines, we often think in terms of computers and electric or gas powered machines. Many tools we use in everyday life are low-tech tools called simple machines. Humans have used simple machines for thousands of years! They allow humans to achieve tasks that would otherwise be impossible with only human strength.

Having a foundation of how simple machines work and their uses will support children as they create their “problem-solving” toolboxes. Providing experiences for children to ideate and test solutions supports the application of their knowledge about simple machines. How can you create physical spaces and a classroom culture in your classroom that promote prototyping, testing, and problem-solving with simple machines?

Below are some examples of simple machines in everyday life:

Ramps – Ramps are used on roadways, highways, and parking garages to allow cars to access multiple levels. Ramps are also used to help people who use wheelchairs or strollers access buildings or areas that would otherwise only be accessible by stairs.

Pulleys – Pulley allow an object to be lifted with minimal effort or force. They are used in elevator lift systems and construction sites.

Levers – A lever is a bar that moves at a pivot point. A lever allows someone to move an object that is heavy or fixed. One example of a lever is a pair of scissors. The two pieces operate at pivot point and allow the paper to be held in place as force is placed on the blades; allowing a cut to be made.

Wedge – A wedge is generally used to separate a material when applied with force. Wedges materials that are wide at one end and come to a point on the other. One example of a wedge is an axe. An axe consists of a wedge typically attached to a pole. When a person swing the axe and comes incontact with a material like a wooden log, the point of the wedge creates force in two directions and splits the piece of wood. Our teeth are also an example of a wedge!

Screws – A screw is twisted inclined plane that can act to hold things together. Screws are used to secure materials together during building. Another way we use screws in daily life is screw-on lids for jars and containers. A screw on lid is generally much more secure than a snap on lid because it requires a twisting motion to undo.

Once children are familiar with simple machines, they will notice them everywhere! Here are some fun ways to extend the interest and study of simple machines in your classroom:

Simple Machine Scavenger Hunt – go on a scavenger hunt around your school and invite children to identify all the simple machines they can find. You can even bring along clipboards, paper, and drawing utensils so they can draw what they find. This would make a great sorting activity once you’re back in the classroom. Invite children to sort their found simple machines by type, i.e. lever, ramp, screw, wedge, etc.

Lever as a Balance – Explore math terms such as more, less, heavy, light, and equal by creating a balance. You can use any flat and sturdy material such as a board, lid, or ramp. Place another item as the fulcrum such as a rock or water bottle on its side. Invite children to use place materials on each end to explore to math terms mentioned above.

You can find out more about which cookies we are using or switch them off in settings.

This website uses cookies so that we can provide you with the best user experience possible. Cookie information is stored in your browser and performs functions such as recognising you when you return to our website and helping our team to understand which sections of the website you find most interesting and useful.

Strictly Necessary Cookie should be enabled at all times so that we can save your preferences for cookie settings.

If you disable this cookie, we will not be able to save your preferences. This means that every time you visit this website you will need to enable or disable cookies again.

This website uses Google Analytics to collect anonymous information such as the number of visitors to the site, and the most popular pages.